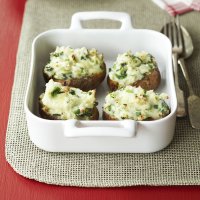 A mouth-watering mixture that tastes amazing on oven-baked potatoes

This page can be found at: http://secretsauce.co.uk/meat-poultry/potato-recipes/cheesy-leek-jacket-potatoes/

Delicious range of authentic French cheeses. Cœur de Lion was born from the creation of a camembert so creamy and tasty that its unique recipe was patented. This camembert was so popular with consumers that Cœur de Lion started producing other soft cheeses, including Le Brie, Chaumes, La Buche, Chavroux, Crème de Brie and Pie d’Angloys. Cœur de Lion is part of a family run French cheese company founded by Jean Noel Bongrain in 1956. Now run by the second generation, the company is passionate about only making authentic and delicious French cheese.

Bored of traditional cheese on toast? Step it up a gear with delicious brie, packed full of flavour

A great dish which is simple to make, guaranteed to impress your other half

A delicious curry-filled baked potato with a fruity twist