Get ready for March 4! Pancake recipes and the story behind Shrove Tuesday 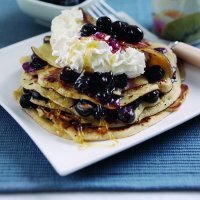 Shrove Tuesday, or pancake day, is the one day of the year when we all go crazy for those round, fried batter treats that we smother in all manner of toppings. It is held every year on the last day before the fasting period of lent begins and is effectively, for many religions, the last day to indulge yourself and use up the ingredients that were traditionally given up during Lent; butter, eggs and fat.

The word shrove has nothing at all to do with pancakes, it is derived from the old word shrive, meaning confess. During the middle ages, those who believed they had sinned would confess these sins so they could Lent the next day with a clean slate having been forgiven. Today, Shrove Tuesday is a day of both celebration and penitence and takes place this year on the 4th March. Mountains of pancakes appear on tables in the UK and numerous other countries as we embrace the tradition by tucking into these delicious treats.

There are two main types of pancake; the British and American versions. We in the UK traditionally make them very thin, like a crepe, in a larger frying pan, add the topping then roll them to eat them. American pancakes are smaller and thicker circles that are stacked and syrup poured over the top so it runs down the sides in a cascade of sticky, delicious gooeyness.

Whichever style you prefer there is a growing trend for ready made pancakes in packets, as if the packet mixes weren't bad enough! There is only one way to cook a pancake and that is from scratch with plain flour, egg, milk and a knob of butter. Some replace the milk with water and omit the butter. This is personal preference or the recipe used in the pancakes they have grown up with. However you like them they MUST be home made, nothing else will do.

A great deal is made of tossing the pancake when in fact this is simply a flamboyant way of turning it over so both sides are cooked. Much has been made of this simple act over the years in film and on TV. We have all seen comedians sticking pancakes to ceilings and staggering around with them on their heads and covering their eyes. Yes it makes us laugh but in reality, anyone can flip a pancake or even use a spatula if you don't think you have the wrist actions.

The traditional topping for a British pancake has always been sugar and lemon juice, but this too has changed over the years as we have experimented and discovered there are so many ways to enjoy it. Golden syrup is a big favourite now, as is jam and we have also adopted the American tradition of maple syrup.

As much as we would like to we cannot class pancakes as healthy eating. Maybe this is why we tend to indulge just once a year as opposed to our American cousins for whom pancakes are part of their staple diet.

This page can be found at: http://secretsauce.co.uk/food-features/food-focus/pancake-day/

A short link can also be used: http://bit.ly/1cpWUcE