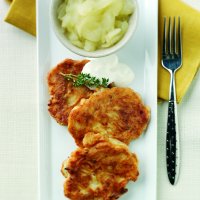 Mouth-watering potato patties - and don't be put off by the combination of sour cream and apple sauce, try it! It's so tasty!

This page can be found at: http://secretsauce.co.uk/vegetarian/potato-recipes/israeli-potato-latkes/

Look for the Lion on eggs to guarantee the highest standards of food safety. All Lion Quality eggs come from British hens vaccinated against salmonella and are date-stamped for freshness.

Celebrity chef Marcus Wareing's fantastic recipe for baked egg custard tart serves 8, but be prepared for it to only serve 4 because everyone will want a double helping!

What could be more fun on Pancake Day than setting fire to your dessert?

These potato cakes are delicious on their own, or serve them alongside a light meal to bulk it up and keep guests or your family satisfied!

Warming, filling and very very tasty. Perfect for after an autumnal walk in the park or a trip around the shops!