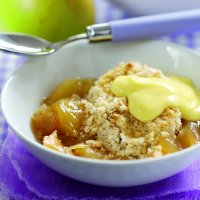 Love crumble! Its so easy to make. The big, big rule is never to add the sugar to the crumble until the butter is rubbed into the flour. The reason is that the sugar and butter will cream, or mix together, a bit like a sponge mixture and the crumble will be heavy and more like pastry. So gently mix the sugar through with a spoon at the end. Then just pour over the coked apple. Do not pack down and leave as light and fluffy as possible.

This page can be found at: http://secretsauce.co.uk/cakes-desserts/apple-recipes/phil-vickerys-apple-crumble/

A short link can also be used: http://bit.ly/ho7eB4