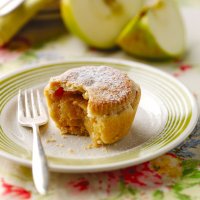 If you happen to have any cooked apple left over that won't fit into the pastry cases, it can be kept in the fridge for a few days and is delicious eaten with yoghurt and granola for breakfast.

This page can be found at: http://secretsauce.co.uk/cakes-desserts/apple-recipes/bramley-apple-ginger-and-caramel-pies/

A short link can also be used: http://bit.ly/Scvq4s

Aldo says: "I am not the best at making cakes, but this one is so simple you cannot go wrong. Also in its favour - it can be made well in advance." Aldo Zilli's sugared chestnut & coffee cake recipe