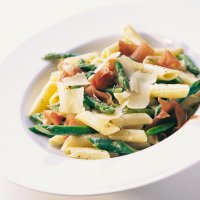 Serves 4 as a main course

This page can be found at: http://secretsauce.co.uk/pasta-rice/penne-recipes/asparagus-parma-ham-penne/

A short link can also be used: http://bit.ly/ia0Ld8

British Asparagus is hailed by leading chefs as the best in the world. It's packed with nutrients, bursting with taste and a truly versatile vegetable. Just don't miss out on its relatively short season of just seven to eight weeks!

Scallops take some beating for a fresh flavour of the sea and with asparagus and sweet chilli, this recipe's full of aphrodisiac ingredients

Lasagne can be a bit tricky to make, but it's so worth the effort. And if you're looking for a lasagne that's a bit different, the salmon adds a tasty, unusual flavour

With hardly any preparation required, this pasta dish delivers exactly what it says it will, it's quick and delicious!

This cheesy meatball and pasta bake makes a great midweek meal, perfect for all the family. The natural, mild taste of Dutch Edam means this pasta dish is a winner with the kids. Just serve with a crisp green salad.

Pasta bakes are a great mid-week dinner because they're delicious, easy to cook and need hardly any preparation!