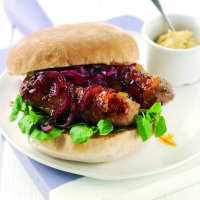 Sausage baps are often served with onion marmalade, so why not try this version with real marmalade!

Delicious with a little mustard or tomato ketchup and sliced tomatoes.

This page can be found at: http://secretsauce.co.uk/meat-poultry/sausage-recipes/marmalade-glazed-sausage-baps/

A short link can also be used: http://bit.ly/gHf4xN

Farmhouse Breakfast Week (23-29 Jan 2011) is back for its twelfth year, with a brand new theme – “Shake Up Your Wake Up”.  We’re challenging all breakfast skippers to rethink their morning routines, and make time for the most important meal of the day. As many as one in four consumers regularly skip breakfast, so we are keen to raise awareness of the benefits that can be gained by making that little bit extra time for breakfast.

If you think your porridge recipe's getting a bit samey, this delicious cranberry spiced version will liven it up!

These look absolutely mouth-watering and they are! And even better, they take just 11 minutes to make!

Great for using up left over sausages, simply slice and scatter over the pizza base instead of the bacon. White or wholemeal bread mix or pizza mix can be used instead.

This is a classic British dish that's like a giant sausage roll. Serve with greens and mustard for a traditional dinner for two

This is the best breakfast, especially if you've over-indulged a little the night before, but don't save it until then, it's great for dinner too!