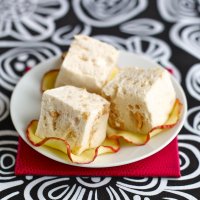 Super trendy treat, tastes just like apple pie but fat free. Marshmallows are one of the food trends of 2013.

For the marshmallow base:

A free standing food mixer with a whisk attachment

A sugar thermometer (handy but not essential)

This page can be found at: http://secretsauce.co.uk/cakes-desserts/apple-recipes/apple-pie-marshmallows/

Pink Lady apples have a distinctive crisp texture and fizzy flavour – similar to champagne. It takes 200 days of tender care and, once ripe, each apple undergoes a rigorous quality control process to ensure that the high standard is kept – only the best apples can become a Pink Lady apple. Pink Lady apples are perfect culinary apples as they retain their texture and unique flavour and little, if any, additional sugar needs to be added.

This wonderfully decadent dessert is perfect to serve at a large family gathering.

Even when the sun doesn't always shine this tasty, zingy very easy to make Australian recipe will make it seem like it does.