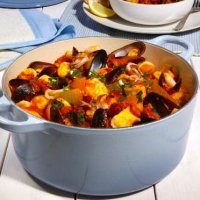 A cataplana takes its name from the Moorish designed copper domed dish it was originally cooked in. The dish was first introduced into the Algarve region of Southern Portugal way back in the 8th century .The food was placed in the bowl shaped base and the domed top provided a sealed space for the ingredients to simmer and infuse. Today the cast iron cocotte is a perfect replacement for such a cooking pot. Ingredients for the cataplana vary from region to region with use of much artistic licence but the base of tomatoes, onions, wine and herbs remains the same. This recipe influenced by the Western Algarve style includes potatoes, firm white seasonal fish, seafood, peppers and a hint of chilli added to the base sauce. Serve traditionally straight from the cooking pot with crusty bread.

Firm white fish - Any mix of fish such as monkfish, bass, and mullet are suitable depending on availability.

Mussels - Clean the mussels and remove the beard, this is the weed like substance at the edge of the mussel. Discard any damaged or completely opened mussels.

Squid - The squid can be replaced by raw king prawns if preferred.

This page can be found at: http://secretsauce.co.uk/fish-seafood/stew-recipes/cataplana-portuguese-fish-stew/

A short link can also be used: http://bit.ly/ytU8TI

Le Creuset is recognised the world over for market-leading, premium quality ranges of enamelled cast iron cookware, multi-ply stainless steel, toughened non-stick, stoneware and ceramics, along with its outstanding range of wine accessories.

These small filled crepes make a delicious appetiser, snack or a light supper. They can be prepared in advance, chilled and re-heated on the crepe pan just before serving.

This rich chocolate cake has a hidden tang from the raspberries it contains. It can be served warm as a dessert but also slices well when cold as a cake.

It takes a little more time to prepare this recipe but the cooked result is worth it. A mature Cheddar cheese is used for the stuffing and sauce, but feta cheese also works well.