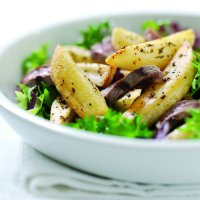 For an ultra quick turn around, lose the dressing and the pepper mix

This page can be found at: http://secretsauce.co.uk/meat-poultry/steak-recipes/griddled-sirloin-steak-and-chip-salad/

A short link can also be used: http://bit.ly/fWpUBb

Love Chips will be celebrating National Chip Week 2010 from 15th - 21st of February.

In the mid 1970s, curry sauce became a popular accompaniment served in fish and chip shops. Why not rediscover its super fruity flavour by making your own at home? It’s the perfect partner for warm, comforting chips

Gammon, egg and chips gets a makeover with this delicious honey and mustard topped gammon served with poached egg and satisfyingly chunky wedges. A great pub classic with a modern twist that can be enjoyed in the comfort of your own home

Fish and chips are 150 years old in 2010 so celebrate with cod pieces with pesto, baked with chunky homemade chips, then served with minted mushy peas!

A juicy, tender steak with a traditional peppercorn sauce and an added chilli kick, ready in just 10 minutes

To celebrate its 35th birthday this year, Beefeater has released four exclusive and, until now, secret recipes using four of their most popular sauces so you can recreate the ultimate steak eating experience at home

To celebrate its 35th birthday, Beefeater has released four exclusive and, until now, secret recipes using four of their most popular sauces so you can recreate the ultimate steak eating experience at home