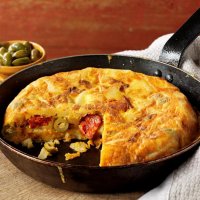 I recommend eating the tortilla when still a little runny in the middle. Each tortilla is different, after trying them different ways you'll find the one you love the most - but this one is my favourite for sure.

This page can be found at: http://secretsauce.co.uk/meat-poultry/egg-recipes/spanish-tortilla-with-spanish-olives/

A short link can also be used: http://bit.ly/r7LUFd

Anybody can cook Italian, Thai or traditional British food so why not push your culinary boundaries and try out the taste of the Mediterranean using Olives from Spain! Although often overlooked as a snack or pre-dinner nibble, olives are a tasty and nutritious ingredient that can be used in a whole host of recipes, be it tapas, main dishes and even desserts!

More from Olives from Spain

A delicious, authentic sea bass dish with a whole host of Spanish ingredients

A delicious chicken dish using the finest ingredients from Spain

A fun way to prepare egg sandwiches. Get your kids to help you design the faces!