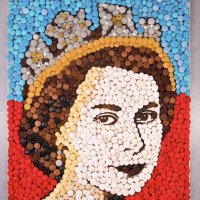 What recipe calls for over 50kg of Regal-Ice, 50kg of Royal Icing, 20kg of Marzipan and over 40 tubes of Gel Food Colours? ...A Dr. Oetker celebration cake fit for a Queen.

To toast HRH's 60-year reign, Leeds based baking brand Dr. Oetker has teamed up with food artist extraordinaire, Prudence Staite, to recreate a 6m² ‘Cupcake Queen' portrait of Her Majesty with over 2,012 hand-decorated cupcakes.

Red, white and blue were the order of the day as the culinary artist used the Dr. Oetker home baking range to decorate the edible artwork, including ten cans of Gold and Silver Shimmer Spray, 60,000 Silver and Gold Soft Sugar Pearls and over 140 white Wafer Daisies to adorn the sparkly diamond-encrusted crown featured in the original image.

Prudence, who has been creating edible art for over 12 years, spent over 300 hours on the colourful portrait. She said: "I was excited to be given the chance to create such a meaningful portrait to celebrate the Queen's reign. I have been working with savoury food and chocolate for years, but this was a whole new challenge. Decorating over 2,000 cupcakes was no mean feat, but the Dr. Oetker range of products were so easy to work with. I don't think I've ever seen so much icing in my studio before!"

Gill Davies, Marketing Director at Dr. Oetker, said: "We wanted to create something remarkable to mark this special 2012 celebration and as baking is the cornerstone of how the British celebrate such occasions we thought we'd take this to a grand scale. It was a pleasure to see this work of edible art being created with range of ingredients and decorations that home bakers across the UK work with on a daily basis."

The ‘Cupcake Queen' was built in Prudence's studio in Pamington, Gloucestershire and also featured 20kg of Plain and Milk Chocolate Chips and 30kg of Easy Swirl Cupcake Icing, which were used to define the Queen's face. A video showing Prudence working on the masterpiece was produced and sets out how she built the artwork on this impressive scale.

To view the video of the portrait creation and to find out more info, head to http://youtu.be/lsWh5C89YNI

This page can be found at: http://secretsauce.co.uk/food-features/food-focus/dr-oetker-creates-cupcake-portrait-of-queen/

A short link can also be used: http://bit.ly/KCbwtG

Trust, sustainability and credibility are extremely important factors in the Dr. Oetker family business. Established over 100 years ago in Germany, the business has developed with these values at its core and now enjoys a reputation as one of the most trusted food brands internationally.

Delicious cakes on a stick - these make a refreshing change to a bunch of flowers or a great centrepiece for a party.

The ultimate colourful bite-size dessert - great for kids' parties or baking with the children!