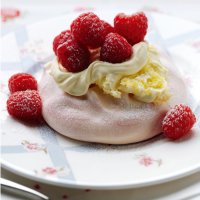 Use whatever fruit is in season - raspberries, strawberries, blackberries - and indulge in this delicious fruity pavlova

Omit the rosewater and pink colouring and add cocoa powder to the mixture for a chocolate version. Or, of course, you could omit all flavourings and simply serve in the traditional way with clotted cream and strawberries.

Cooked meringues will keep in an airtight container for up to 3 weeks.

This page can be found at: http://secretsauce.co.uk/cakes-desserts/raspberry-recipes/rosewater-mini-pavlova/

A short link can also be used: http://bit.ly/hpAljb

Cornish Clotted Cream is one of the few British foods to have been awarded the accolade of a PDO. This Protected Designation of Origin recognises and protects the uniqueness and distinctiveness of our cream. More important still is the expertise of the Rodda family who, for over a century, have been distilling the best of Cornwall into a single mouth-watering treat: Cornish Clotted Cream.

The perfect quick dish - the combination of garlic, mushrooms and cream is taken to another level

Perfect for handing around with a bit of mulled wine, or maybe after a spot of carol singing, these Cornish rum Nickys will certainly warm you up

A finalist in British Lion eggs' Eggs Factor contest, Elaine Garner's blackberry and raspberry souffle omelette was judged to be one of the best by celebrity chef Paul Merrett

With Pancake Day just around the corner, what could be better than using up your fridge fail-safes to whip up a batch of delicious raspberry pancakes?

A delicious minty cheesecake made with After Eight, the nation's favourite after dinner mint. Perfect for a dinner party or a tasty treat! Mint & vanilla cheesecake recipe