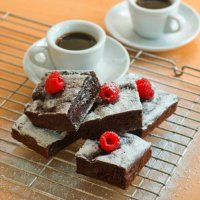 An indulgent yet guilt-free dessert

Once you've got the basics sorted you can vary the recipe with different nuts and quantities of dried fruit - walnuts are lovely!

This page can be found at: http://secretsauce.co.uk/cakes-desserts/brownie-recipes/chocolate-rum-and-raisin-brownies/

A short link can also be used: http://bit.ly/hHXmhp

Real sugar, with all its taste and texture, is combined with a tiny amount of sweeteners to make Silver Spoon Half Spoon twice as sweet.

More from Half Spoon Granulated Sugar

A delicious fruit compote, served with a cool dollop of yoghurt

Having some friends round for a gossip? These will go down a treat!

Take just 10 minutes out of your day to do a bit of prep and then 30 minutes later sit down with a cuppa and a delicious chocolate and cranberry brownie. Yum!

Aldo says: "I am not the best at making cakes, but this one is so simple you cannot go wrong. Also in its favour - it can be made well in advance." Aldo Zilli's sugared chestnut & coffee cake recipe