Who will be crowned Master Spud 2011? 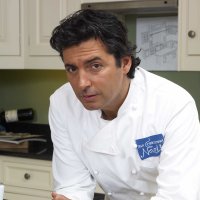 The ad will show the five members of the public battling it out to be crowned ‘Master Spud 2011’.  Each cook will prepare their favourite potato recipe that can be cooked in under 20 minutes and will be tasted and judged by Jean-Christophe – and at the end of the ad he will crown one cook the Master Spud 2011 winner.

This competition was launched last year by Potato Council to search for a winning healthy potato recipe. Keen cooks were invited to upload their favourite potato recipes onto www.manyfacesofpotatoes.co.uk and shortlisted entrants took part in regional heats held at popular shopping centres, alongside Jean Christophe.

Short videos of their culinary demonstrations from the regional heats were placed online and members of the public were invited to vote for their favourite recipe.  Five finalists were selected based on the popularity of their dish securing them a place in Master Spud final, to be aired as a TV ad this Sunday 26 June.

The three-minute feature -length TV advert featuring the contestants and Jean Christophe Novelli will air exclusively on More 4, where one of the finalists will claim the title of ‘Master Spud 2011’.

Jean Christophe commented, “I have really enjoyed taking part in Master Spud 2011.  Potatoes are such a versatile ingredient – they’re always on my restaurant menus. They are the perfect base for any healthy and delicious meal and remain an important part of British life.

“This competition offered budding chefs all over the UK the chance to show off their cooking skills to the nation and inspire even more people to cook with potatoes.

“As all of these recipes show, potatoes are quick and easy to cook with, and can be used in so many different ways to create fantastic, healthy, and great tasting dishes - simply by using a bit of imagination. Crowning one of the five finalists ‘Master Spud 2011’ is going to be a very tough decision to make.”

Potatoes cooked with minimal fat and salt are a healthy choice as well as a good source of vitamin C.  Many potato dishes take under 20 minutes to cook and prepare – perfect for busy working mums or professionals.

To find out more about Master Spud, upload your recipe and learn more about potatoes and recipes visit www.manyfacesofpotatoes.co.uk.

This page can be found at: http://secretsauce.co.uk/food-features/food-focus/who-will-be-crowned-master-spud-2011/

A short link can also be used: http://bit.ly/f2Ggt9