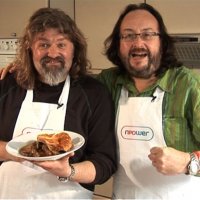 Great football, great food - as the nation gets ready for football fever this Summer, npower has teamed up with the Hairy Bikers to prepare a football-themed cookbook and introduce Britain to Smart Cooking.

The 32 energy-rated dishes are all inspired by the nations taking part in the big tournament.

The recipes, cooked by energetic chefs and football fans the Hairy Bikers, have all been given star ratings to indicate how energy efficient they are to prepare.

The Hairy Bikers have filmed their own energy saving tips, together with simple demonstrations of how to prepare a selection of the dishes, to help budding cooks save both power and money. The cookbook contains a delicious array of options, from England's Steak and Ale pie to host nation South Africa's Pumpkin Fritters.

npower is an Official Supporter of the campaign to bring the FIFA World CupTM to England in 2018 and is encouraging you to do your bit to ‘Back the Bid' this Summer by visiting www.npower.com/smartcooking to download recipes and register your support for the Bid campaign.

Hairy Bikers Si King and Dave Myers commented: "We're massive football fans and think it's fantastic that npower has come up with a way of getting everyone excited about enjoying the football and doing their bit for the planet at the same time. You can even arrange cook offs with your neighbours to see who can prepare the best half time snack - just make sure Portugal doesn't pip England to the post this time around!"

Each dish has been given a star rating of one to five, with a rating of five indicating the dishes that use the most energy to prepare. For example, fellow group one competitor Algeria's national dish of couscous has a rating of just one star, whereas the USA's Blueberry Cheesecake involves 55 minutes of cooking time, earning it a three star rating. England's Steak and Ale Pie weighs in with a rating of five stars- make sure to cook up a big batch and keep the extra aside to ensure it's as energy efficient as possible.

The cookbook is the latest initiative from npower to promote ‘smartpower', which encourages people to think about their energy consumption and, with the help of a smartpower electricity monitor, control the amount of energy they are using around the home and make savings to help both the environment and their bank balance.

Wander the globe with npower's Big Cook Off and raise awareness of your energy consumption at the same time. To download the recipes or watch the Hairy Bikers preparing the dishes, log on to www.npower.com/smartcooking

This page can be found at: http://secretsauce.co.uk/food-features/food-focus/hairy-bikers-world-cup-recipes/

A short link can also be used: http://bit.ly/gT0RKU